A Portland antifa group is handing out flyers featuring a chainsaw slicing through the president’s head to advertise a training class preparing for a clash at a free speech rally scheduled for the next day. The group is openly calling for violence and said in a statement that they are “unapologetic” about “physical militancy.”

Antifa flyer for fighting workshop shows chainsaw slicing through Trump's head– "By training together we can push back white supremacy…" pic.twitter.com/7qSpJVTDGe

The June 4 event that the leftists are gearing up for is being advertised as a “Trump Free Speech Rally with Based Stick Man.”

“There will be speakers exercising their free speech, live music, flags, and an uplifting experience to bring back strength and courage to those who believe in freedom,” the event page reads.

On their flyers, Rose City Antifa urges people to “oppose alt-right bigot ‘Based Stick Man’ Kyle Chapman,” and attend a “group self defense in the streets” workshop. The flyers also assert that “we will fight them with our every ounce.” 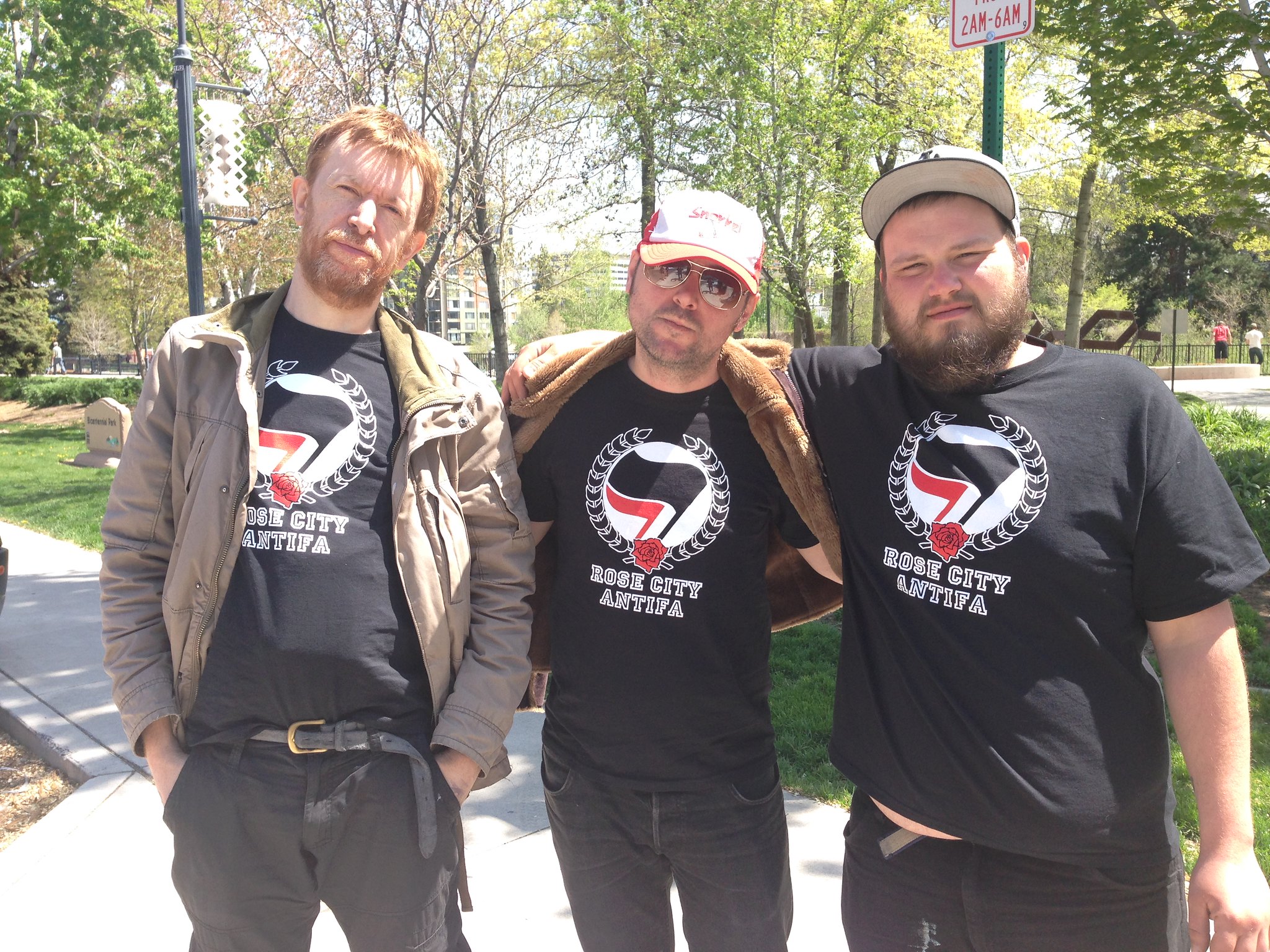 The antifa training will take place at the SEIU Local at 6401 SE Foster on Saturday, June 3, from noon until 4 p.m.

“This workshop will focus on how to defend against attacks by large groups of people, how to think strategically in such situations and keep yourself and your friends safe,” the flyer advertises. “Attendees will play live action role play of group vs group scenarios and play other educational strategy games. The workshop is hosted by longtime Portland activists and strategy gaming experts.”

The training seminar comes after antifa has been repeatedly chased out of areas by defenders of free speech who are tired of right-wing speakers being shut down by the violent left.

Nearly 300 people have RSVP’d for the counter protest against the free speech rally, on an event page that reads, “it is time that Portland stood up to these ceaseless rallies which are little more than opportunities for racists to network, mainstream their message, and initimidate [sic] vulnerable communities.”

In an additional statement posted to the event page, the organizers wrote that “having reviewed the successes and failures across the country in addressing similar events, our view is that an indiscriminate approach attacking their entire event would not be strategic and plays into their hands in several important ways.”

Instead, the group plans to “participate in resisting this bigotry in whatever capacity they find appropriate,” and hold a separate rally adjacent to the free speech rally.

The statement continues on to call for violence (emphasis added by BLP):

“We are unapologetic about the reality that fighting fascism at points requires physical militancy. Anti-fascism is, by nature, a form of self-defense: the goal of fascism is to exterminate the vast majority of human beings. However, we realize that not everyone is able to do that type of work for a wide variety of reasons. We cannot emphasize enough that a diverse range of other forms of resistance are also crucial. There are groups in attendance that will be prepared to handle physical opposition, and all those compelled are welcome to join in that effort. We want to be clear that we are by no means expecting the entire rally to want, or be able, to do that. We ask that all rally attendees respect the boundaries and safety of one another.”

Additionally, the statement asserts that they do not condemn property damage and vandalism:

“While we are not opposed to the tactic of property destruction, we would encourage other individuals and groups to seriously consider the strategic value of their chosen actions at this event. The climate in Portland and across the country right now is such that extremely heavy charges are being handed out for acts of vandalism that have little impact beyond the symbolic.”

As we previously reported, Portland Mayor Ted Wheeler has already called for the federal government to prohibit the rally, in a move to selectively ban free speech. Though he called on the free speech activists to stand down, he has not said the same towards the violent leftists.

“I am appealing to the organizers of the alt-right demonstrations to CANCEL the events they have scheduled on June 4 and June 10. I urge them to ask their supporters to stay away from Portland,” Wheeler wrote in a statement posted to Twitter. “There is never a place for hatred and bigotry in our community, and especially not now.”

The mayor cited Friday’s fatal stabbing attack by Jeremy Joseph Christian, 35, a mentally ill Bernie Sanders supporter, who had previously been removed from a free-speech rally by right-wing attendees. The attacker has been widely portrayed in the liberal media as a supporter of President Donald Trump, despite one look at his Facebook account telling a different tale.

The ACLU has condemned Wheeler’s attack on the freedom of speech, issuing a statement which said “the government cannot revoke or deny a permit based on the viewpoint of the demonstrators. Period.”