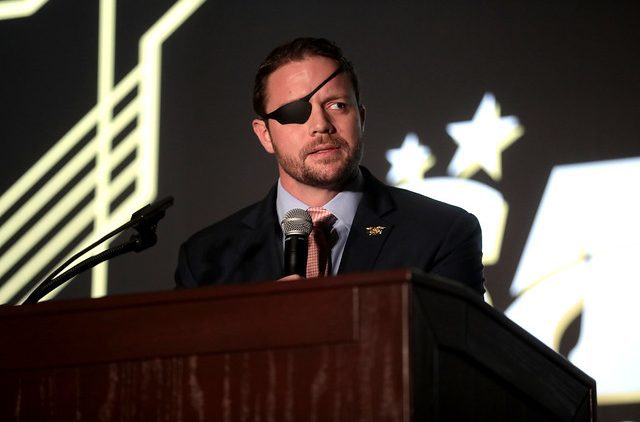 Rep. Dan Crenshaw (R-TX) is arguing against the proposed withdrawal of troops from Afghanistan, earning his nickname of “John McCain 2.0.”

Crenshaw is arguing that the permanent occupation of Afghanistan is needed to prevent another 9/11 from occurring, even though he offers no evidence that occupying Afghanistan prevented another attack like that from happening.

“I think Americans are pretty sick of nation-building, but the general public can’t really distinguish between 200,000 troops nation-building, which does seem like a waste of money to a lot of people and a lot of waste of resources, but they can’t distinguish between that and keeping a security presence that prevents another 9/11,” Crenshaw arrogantly stated in a speech delivered to the Young America’s Foundation.

“People ask all the time: ‘Well, what do we get for 20 years of war?’ No more 9/11’s! That’s what we got! That’s a pretty good deal,” he added to a smattering of applause from the neoconservative audience.

Crenshaw then talked himself up as a hero for killing “some bad guys” as a pretense for keeping a never-ending U.S. military presence around the globe as American freedom is destroyed in the homeland.

The clip of Crenshaw bloviating for endless war can be seen here:

Big League Politics has reported on Crenshaw’s lobbying on behalf of the defense contractors in the past:

“Rep. Dan Crenshaw (R-TX) has become a rising star as a freshman Congressman after being promoted relentlessly by the GOP establishment and fake news media, including NBC’s Saturday Night Live.

Unfortunately, he has emerged as one of President Donald Trump’s biggest intra-party foes in the U.S. House. Crenshaw showed his true colors yet again when he voted in favor of a resolution condemning President Trump’s pullback of troops in Northern Syria on Wednesday.

Crenshaw has been a frequent critic of President Trump’s foreign policy, so much so that he has been dubbed McCain 2.0 for his incessant warmongering. He has penned several op/eds in the mainstream media endorsing a Bush-era foreign policy.

“These troops are not victims. They are volunteer soldiers, part of America’s warrior class, who believe in what they are fighting for. They have seen the true nature of this enemy and know it cannot be wooed into submission by simply leaving it alone,” Crenshaw wrote in a Wall Street Journal op/ed published in February.

“In truth, mission success in the Middle East means preventing another 9/11. America’s troops risk everything to take the fight to the enemy so that the enemy cannot bring the fight here,” Crenshaw added.”

Crenshaw is the last hope of the neocons who lost much of their foothold in the GOP during the Trump era. He represents all that is wrong with the Republican Party establishment.