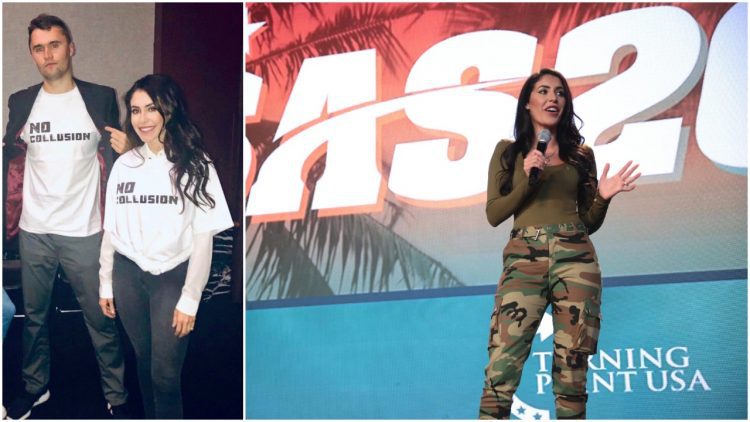 The Republican primary race for Florida’s 13th Congressional District is scheduled to take place on Aug. 18, and candidate Anna Paulina Luna is hoping she is elected to take down Democrat Charlie Crist in November’s general election.

“I’m sure as hell not a politician,” she said, in a campaign video showing her firing guns. “I won’t ever stand here and lie to you.”

Luna is a Conservative Inc. operative hoping to make the jump to U.S. Congress. She has worked as Turning Point USA’s Director of Hispanic Engagement in the past. Big League Politics has reported on TPUSA founder Charlie Kirk’s support for mass immigration and stapling green cards to diplomas for foreigners.

Luna’s principles do not seem to be far from Kirk’s. Luna often parades around her Latina heritage to capitalize on her minority privilege, but her ethnic makeup has perhaps led her to support of amnesty for illegals.

“First and foremost, there is DACA recipients who absolutely we need to have a solution for them,” Luna explained to Eric Bolling in a clip from 2019. “Because these people were allowed by Republicans and Democrats to stay, and we need to provide a solution for them. They are not responsible for the sins of their parents.”

After Big League Politics and other outlets reported on Luna’s support for amnesty earlier this year, she went on the offensive, claiming without providing any evidence that the media reporting on her history of supporting amnesty were paid off operatives working for her opponents.

“Dirty political operatives working with one of my opponents is trying to spread fake news about me and challenge me on my immigration views,” Luna said in a social media video, claiming in the video that she supports ending DACA.

“I’m of Mexican descent, I’m descended of legal immigrants, and I’ve been down to the border three times. That is something my opponents can’t say. My views are crystal clear. I stand with President Trump on immigration, period,” she added.

Luna is playing sleight-of-hand with her campaign rhetoric. Although she claims she wants DACA to be ended, her proposed ending of DACA involves giving amnesty to illegal aliens who have flouted immigration law for years.

“We do need to provide some way, some resolution, for these people that really never had a choice in the matter of coming her in the first place,” Luna reiterated in another social media video.

Immigration hawks are not impressed with Luna’s political double speak on the campaign trail. The Americans for Legal Immigration PAC (ALIPAC) has admonished Luna as a RINO because of her consistent support for amnesty.

“Most Americans oppose any pathway to citizenship and voting rights for illegal aliens who will vote 90% Democrat in future elections handing full control of the all three branches of the US Government to the left forevermore,” they added.

ALIPAC has endorsed Luna’s competitor, George Buck, a military veteran who stands firmly against illegal immigration and amnesty for aliens. Buck has raised more money than Luna, but establishment-backed contender Amanda Makki leads the GOP field in overall fundraising. Other candidates in the primary race include Sheila Griffin and Sharon Barry Newby.