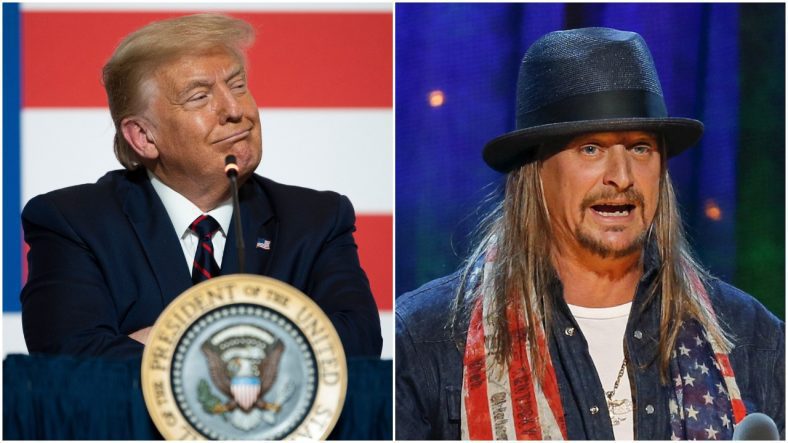 “Hello, everyone. I love you all,” Trump said during a video address at Kid Rock’s Indiana concert., who was wearing a “Make America Rock Again” hat in his video address to concertgoers.

“Hello, everyone. I love you all,” Trump said during a video address at Kid Rock’s Indiana concert. “I know you’re having a great time at the Kid Rock concert tonight. Quite frankly, he’s amazing. All of you in attendance are truly the backbone of our great country. Hard-working, God-fearing rock-and-roll patriots.”

“Bob [Rock] is truly one of the greatest entertainers of our time. Not the best golfer by any means, his golf game could use a little work, but a great, great entertainer, and that’s why you’re there. Let’s all continue to love one another, fight for our God-given freedoms, and most of all, let’s make America rock again,” Trump added.

Big League Politics has reported on how Kid Rock is one of the few popular musicians with the courage to give the middle finger to globalist tyranny, pertaining to COVID-19 or anything else:

“Rock star Kid Rock said that he will not play at any venues that require proof of vaccination, assuring fans that he will either get any vaccine mandates lifted before his 2022 concert tour or he will refund their tickets. Rock said that he backed out of playing at least two cities this year due to Coronavirus tyranny. Kid Rock, multi-platinum singer of “Bawitaba” and “All Summer Long,” called out the liberal media very succinctly, saying, “Fuck y’all.” Rock previously flirted with the idea of running for the U.S. Senate from Michigan against Debbie Stabenow, gaining some traction and even leading a poll before backing out of the race.

In a video message to his fans, Kid Rock addressed the issue of “vaccine mandates and venues” as it pertains to his upcoming 2022 “Bad Reputation” tour that kicks off in April with Foreigner and Grand Funk Railroad.

Kid Rock stated: “People saying, I’m not going to that venue because there’s a vaccine mandate, this that and the other. Trust me. We’ve done all our research on this and the consensus says that all this is going to be done — if there are any of these venues, I’m not aware of any — but if there are any they’re going to be gone by the time we get to your city. If they’re not, trust me, you don’t have to worry. You’ll be getting your money back because I won’t be showing up either.”

“If you think I’m going to sit out there and say, ‘Don’t tell me how to live…while people are holding up their fucking vaccine cards and wearing masks, that shit ‘aint happening. So, it’s actually kind of unfortunate. We had to, we actually scratched Buffalo, New York off the list because of that, and Toronto, Canada, and several other cities we were looking at, because, you know, I’m not one way or the other but I don’t want to deal with that shit either. And I know that you don’t,” Kid Rock assured his fans.”

Kid Rock has lived up to his “American Badass” branding. He is the real deal, a true patriot, and will never stop shoving it in the faces of liberal cowards. Trump should consider him as his new vice president during his inevitable 2024 run.