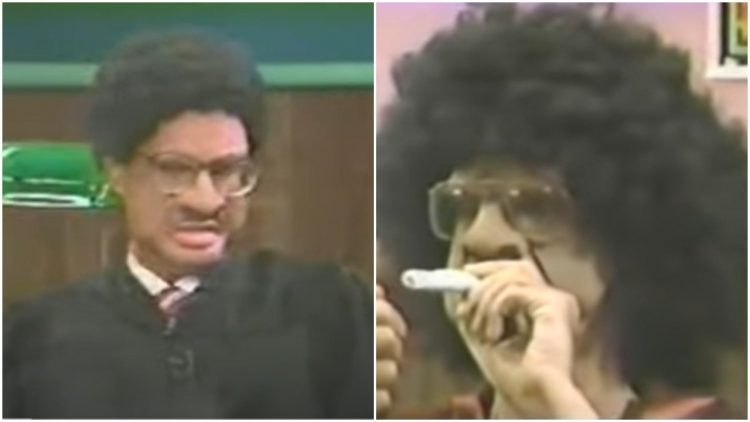 Before shock jock Howard Stern became woke, he performed extremely offensive “comedy” skits that made fun of black people and other groups.

One of his worst displays had to be his lampooning of Supreme Court justice Clarence Thomas, in which he caricatured a black man in the most stereotypical of ways to denigrate the conservative jurist.

In one clip, Stern wore blackface, put on cartoonishly big lips, and donned an afro for an “interview with Clarence Thomas.”

“Oonga boonga… I would like to be the head muckity muck of the Supreme judiciary contingent,” Stern said in the highly offensive clip.

“I want to relate to the black people, tell them not to fear me on the Supreme Court Justice… I will talk to you about the cannabis,” Stern added.

“I must tell you that I have a white wife,” Stern said.

He brought out a white lady who was meant to represent Thomas’ wife at this point and the racism continued.

“You want to climb under this here robe and kiss your husband?” Stern asked the woman.

The revolting video can be seen here:

This was not the only time that Stern mocked Clarence Thomas in a television appearance. He went back to the well for his racist impression at least one other time.

In the next clip, Stern appeared in a judge’s outfit to perform his impression alongside Hollywood actor Robert Vaughn, who starred on the TV show The Man from U.N.C.L.E.

“I want to share a funny story with you,” Stern said to Vaughn while doing his racist impression. “You know my assistant Anita Hill? She had a lump on her breast, but unfortunately it was my thumb.”

The second clip of Stern’s deplorable racism can be seen here:

In recent weeks, Stern has become an outspoken critic of President Donald Trump, demeaning his own audience in order to slam the president.

“The oddity in all of this is the people Trump despises most, love him the most,” Stern said. “The people who are voting for Trump, for the most part … He wouldn’t even let them in a f*cking hotel. He’d be disgusted by them. Go to Mar-a-Lago, see if there’s any people who look like you. I’m talking to you in the audience.”

“I don’t hate Donald,” Stern added. “I hate you for voting for him, for not having intelligence.”

Stern sold his soul to appeal to the leftist entertainment industry, but his calculated maneuvering may backfire now that his old broadcasts are coming to light.