Two Tennessee brothers attempting to make a quick buck off of the Chinese coronavirus panic by price-gouging hand sanitizer have been shut down by Tennessee Attorney General Herbert H. Slatery III.

Matt and Noah Colvin made themselves the object of derision by many within the state for the shady business scheme. They openly admitted and bragged about driving around the state and neighboring Kentucky in a U-Haul truck, buying up entire inventories of hand sanitizer from retailers such as Dollar Tree, Walgreens, Staples and Home Depot.

The brothers say they spend more than $10,000 purchasing entire regional supplies of hand santizer, leaving everyday citizens unable to acquire any for their own purposes of personal health.

The Colvins intended to sell the product on Amazon for a whopping $70 a bottle. But their scheme was shut down by the online retailer, leaving them unable to move the inventory they had intended to gouge the general public for. The price gouger even had the audacity to claim that he was performing a “public service.”

Now, they claim to be humbly “donating” the massive inventory of hand sanitizer to first responders and local churches, after AG Slatery announced an investigation into their price-gouging scheme. 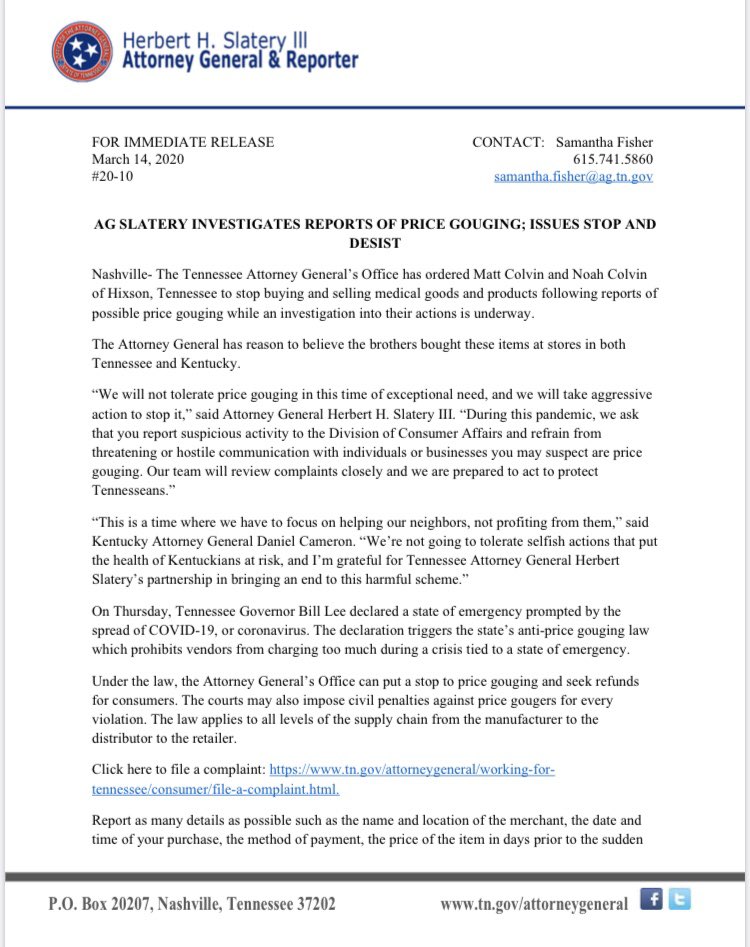 A reporter who went to their private storage unit found state employees loading up their behemoth stock of hand sanitzer into boxes to be utilized in a more decent manner.

HAPPENING NOW: Matt did not answer our calls so we went to his storage unit. The AG’s office was on the scene facilitating with the donation. This is the 3rd stop they’ve been to this morning to gather the sanitizer. @WRCB https://t.co/SLOaEwJLOj pic.twitter.com/REJPNhiSbS

Those who seek to use the coronavirus epidemic as a profit machine deserve the scorn and derision of their neighbors.

This is the Orwellian nightmare. Big League Politics has reported on how government officials have used COVID-19 hysteria to eviscerate privacy rights and normalize Orwellian technology to the public:

AiRISTA Flow, a tech firm based out of Maryland, is marketing bracelets that would beep whenever a person comes within six feet of another individual in the workplace.

SuperCom talks in a cavalier fashion about how their technology will be used to treat ordinary law-abiding citizens like criminals.

Mainstream Media Reported On Armed Woman Pulling Her Gun On BLM Provocateur – But They Didn’t Present The Entire Truth – Here It Is
July 4th, 2020 DC Clothesline