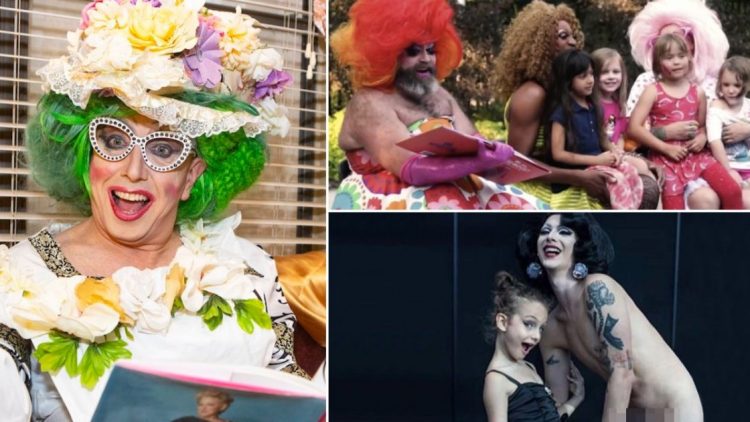 A shocking new video shows the agenda pushed by vile left-wing perverts, predators and psychopaths as they groom children in schools as well as popular culture.

Big League Politics has reported extensively on the instances of grooming and perversion being pushed by left-wing predators in schools and popular culture in recent weeks.

From Disney executives boasting about indoctrinating children into the gay agenda and warping their souls with transgender propaganda:

“We no longer say ‘Ladies and gentlemen, boys and girls,” she added. “We’ve provided training to all our cast members so now they know it’s ‘Hello, everyone or hello, friends.’”‘

To the Biden administration supporting children being drugged and mutilated in order to satisfy their so-called gender transitions:

“Rep. Mary Miller (R-IL) exposed the Biden regime’s support for drugging and mutilating children for the satanic LGBT agenda of gender transitions while questioning an administration bureaucrat on the floor of Congress on Thursday.

Miller pointed out that the Biden White House released a guidance called “gender-affirming care and young people” that encouraged children brainwashed by the LGBT agenda to be drugged in preparation for genital-mutilation operations.
When she asked the HHS Secretary about whether or not it is appropriate to drug and mutilate 12-year-old children, the Biden administration refused to give a direct answer.
The exchange can be seen here:

Today, I asked the HHS Secretary if performing these procedures on 12-year-old children is child abuse and he refused to answer the question. pic.twitter.com/GEJG6ZMvYP

After the exchange, Rep. Miller released the following statement:
“The Biden Administration put out guidance titled “Gender-Affirming Care and Young People” that encourages minor children to have sex-change operations and take chemicals that will permanently eliminate their ability to have children. Today, I asked the HHS Secretary if performing these procedures on 12-year-old children is child abuse and he refused to answer the question. The Biden guidance specifically states, “for transgender and nonbinary children and adolescents, early gender-affirming care is crucial to overall health and well-being.” The Biden Administration is engaging in extreme “woke” politics by encouraging children to take chemical castration drugs and undergo surgeries, and they are lying to children by telling them puberty blockers are “reversible.” I was most troubled that Biden’s HHS Secretary refused to confirm that parental consent would be necessary for these procedures. I will be following up with written questions demanding the Secretary affirm parental rights over their minor children.”’
And individuals who expose the grooming are hit with frivolous criminal charges by a system gamed to protect groomers and predators:

“A black father is facing four misdemeanor charges for exposing the pedo-marxist agenda of grooming in his son’s public school, according to original reporting from The Daily Wire.Harry Jackson, a former Naval intelligence officer, is being hit with these charges after accusing an alumnus of “grooming” children. Jackson told Jorge Torrico, a member of an alumni group of the Thomas Jefferson High School for Science and Technology in Fairfax, Virginia, that he was troubled by his behavior in an online PTSA meeting.

Torrico had made a pass at a high school senior, inquiring about “equity” in a leadership event aimed at middle schoolers. Torrico gave his email to the high school senior to apparently help coordinate the event with children, as LGBT cretins dig their claws into children nationwide. Jackson found this interaction to be repugnant and voiced his concerns as a concerned parent.

“It was very disturbing seeing you exhibit ‘grooming’ behavior. I do work with children and I get background checks, I suggest you do the same because last night was creepy,” Jackson wrote in a tweet.

Jackson’s concerns were echoed by TJ Principal Ann Bonitatibus, who stated that “the original question that was posed by the parent about selection for the leadership summit would have been best addressed to a middle school principal, not to our SGA students.”

“An exchange such as what happened on the Zoom meeting, while all within the public eye, is proof positive why FCPS has clear guidelines for which platforms are used for adults to interact with students,” she added.

As a result of this interaction, Fairfax County prosecutor Steve Descano, who was heavily funded by far-left oligarch George Soros to win his post, charged Jackson with a misdemeanor for “words derogatory” of a “person’s character for virtue and chastity.” The summons claimed that Jackson’s words could “tend to violence and [a] breach of the peace.”

Jackson would receive two additional charges under the same statutes for tweeting: “Poor attempt at character assassination from a person who stalks kids online.” Keep in mind, these charges come as Descano lets violent criminals off scot free due to so-called progressive criminal justice reform.

Jackson’s attorney Marina Medvin believes that these charges represent “the criminalization of protected writings or statements, First Amendment speech — ignoring the face-to-face fighting words requirement of constitutionally-permissible criminalization.” Medvin has filed a motion to dismiss the charges, and that motion will be heard on April 8. If that motion is not successful, Jackson’s trial will begin on April 22.”

America has become the Sodom and Gomorrah of the new age. If this plague cannot be removed from society and the innocence and dignity of children cannot be protected, the nation deserves to perish. Please share this video with everyone in order to open their eyes about the satanic nature of this agenda.