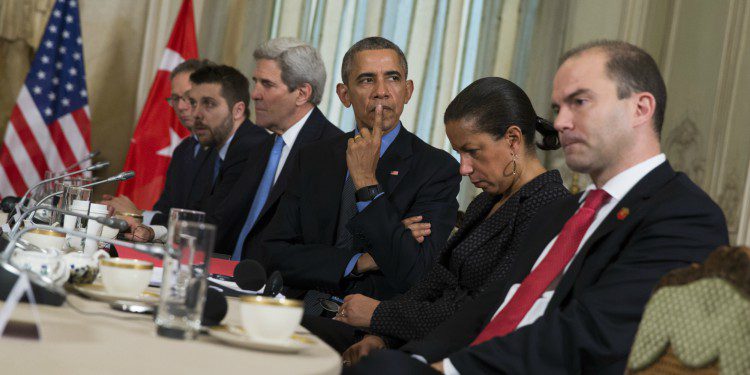 Former Barack Obama speechwriter Ben Rhodes is running a furtive campaign in the mainstream media called Operation “Echo Chamber” to undermine President Donald Trump’s foreign policy, according to a Trump White House memo. Rhodes, who authored the talking point blaming a Youtube video for the al Qaeda attack on Americans in Benghazi, is a failed novelist with one known short story credit and a fiction writing MFA from NYU.

The Obama gang is famous now for shadow diplomacy, including John Kerry’s negotiations with Iran that went around sitting President Trump. We also have evidence that some of Barack Obama’s shadow diplomacy trips — staged at the same exact time Trump was visiting those countries — were meant to obtain permission to surveil Trump on his overseas tours.

The liberal mainstream media is trying to pin Sebastian Gorka as the author of the “Echo Chamber” memo that exposed the plot. The White House is well known for amazing intellectual tomes like Rich Higgins’ National Security Council memo on the plot within the Deep State and State Department to damage Trump.

Here is what the New Yorker reported:

“In early 2017, some of Donald Trump’s advisers concluded that they faced a sophisticated threat responsible for “coordinated attacks” on the new Administration. They circulated a memo, titled “The Echo Chamber,” which read like a U.S. military-intelligence officer’s analysis of a foreign-insurgent network. Instead of being about enemies in a distant war zone, however, the network described in the memo consisted of former aides to President Barack Obama.

The memo claimed that the “communications infrastructure” that the Obama White House used to “sell Obamacare and the Iran Deal to the public” had been moved to the private sector, now that the former aides were out of government. It called the network the Echo Chamber and accused its members of mounting a coördinated effort “to undermine President Trump’s foreign policy” through organized attacks in the press against Trump and his advisers. “These are the Obama loyalists who are probably among those coordinating the daily/weekly battle rhythm,” the memo said, adding that they likely operated a “virtual war room.” The memo lists Ben Rhodes, a former deputy national-security adviser to President Obama, as “likely the brain behind this operation” and Colin Kahl, Vice-President Joe Biden’s former national-security adviser, as its “likely ops chief.” Rhodes and Kahl both said in interviews that the allegations are false and no such organization exists.”

The story makes sense, considering Ben Rhodes’ own ridiculous admission that he manipulates low-IQ individuals in the mainstream media to sell Obama’s terrible policies to the public.

Ben Rhodes actually bragged about his manipulation of clueless reporters to the New York Times magazine in a piece also covered by the Washington Post.

“All these newspapers used to have foreign bureaus. Now they don’t. They call us to explain to them what’s happening in Moscow and Cairo. Most of the outlets are reporting on world events from Washington. The average reporter we talk to is 27 years old, and their only reporting experience consists of being around political campaigns. That’s a sea change. They literally know nothing,” Rhodes told the New York Times magazine.

The New Yorker might be interested in the Rhodes family for reasons other than politics, considering that Ronan Farrow is on the sex harasser beat for the Empire mag and David Rhodes, Ben’s brother, is the president of CBS News.