A federal grand jury in Wilmington, N.C. has filed “voting by an alien” charges against 19 illegals who allegedly voted in to the 2016 presidential election.

The fake news media, known for being a propaganda arm of the DNC, has sworn up and down that there is no such thing as voter fraud, though President Donald J. Trump has often claimed that it exists, and hurts Republicans.

Trending: More Americans Now Identify as Republicans Than They Do As Democrats

“Despite not having any evidence to back up his claims, the president claimed that illegal ballots helped former presidential nominee Hillary Clinton win the popular vote by nearly 2.9 million votes,” said Newsweek in April.

Once again, Trump has bested the arch nemeses of the American people. If 19 illegals in North Carolina – an important swing state – voted, how many others did too?

The American Civil Liberties Union jumped on board the anti-Trump train, too.

“Once again @realDonaldTrump is claiming — without proof — that millions of people vote illegally in our elections. The real conspiracy is elected officials peddling lies in order to delegitimize our democracy and justify restrictions on the right to vote,” the group Tweeted.

Once again @realDonaldTrump is claiming — without proof — that millions of people vote illegally in our elections.

The real conspiracy is elected officials peddling lies in order to delegitimize our democracy and justify restrictions on the right to vote. https://t.co/eT2lNxooWk

“The cases are being investigated by a task force in North Carolina led by Immigration and Customs Enforcement’s Homeland Security Investigations and assisted by Enforcement Removal Operations and the Department of State’s Diplomatic Security Service,” said the Washington Examiner.

Claims that there is no such thing as voter fraud are not only asinine, they are an attempt to undermine a duly elected president. Such claims made by any other president would be treated with utmost gravity.

But when Trump makes a serious claim, the incurious media goes into seek-and-destroy mode. After all, their counterparts in the Democrat party need those illegal votes to stay relevant.

CBP is serious about enforcing immigration law, even in cities that intend to flout it.

Customs and Border Patrol is preparing to redeploy some of the agency’s highly trained tactical personnel throughout the nation’s “sanctuary cities” in order to support Immigration and Customs Enforcement.

The New York Times reported on the development Friday, that signals the Department of Homeland Security(which presides over both entities) is dead serious about national immigration enforcement, even in scofflaw municipalities that have sought to neuter it.

According to the report, more than 100 of CBP’s agents are being deployed throughout the nation to assist in ICE operations. It’s possible the agents could be tasked with apprehending illegal alien fugitives who are released onto the streets from local jail custody. They’ve been described as members of a unit known as BORTAC, an unit of personnel analogous to CBP’s SWAT team.

It’s common for sanctuary city jurisdictions to release individuals who are often violent criminals from custody, ignoring ICE detainer requests that the fugitives be instead handed over to face federal charges for immigration violations.

Sanctuary cities often create unnecessary risks to public safety by forcing ICE to arrest dangerous criminals off of the streets, when they could’ve been simply handed over from municipal jail systems to the federal agency. Eric Garcetti, the mayor of one of America’s biggest cities, openly admits that Los Angeles simply does not participate in immigration enforcement.

Regardless of your immigration status, I want every Angeleno to know your city is on your side. Here in Los Angeles, our police department does not coordinate with ICE or participate in immigration enforcement.

If scofflaw cities such as Philadelphia and Los Angeles are truly determined to undermine immigration law enforcement, then so be it. Attorney General Bill Barr has followed the lead of his predecessor, Jeff Sessions, in instituting new measures to punish the open borders cities, restricting them from federal law enforcement programs.

Conservatives shouldn’t be afraid of advocating for a strong federal government that will step in to perform the law enforcement duties sanctuary cities are cowering away from. 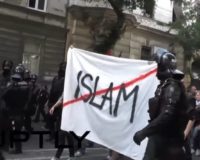 Slovakia: This European Country Does NOT Welcome Muslim Migrants,15 Straight Years Without a Terrorist Attack and Not a Mosque in Sight
February 18th, 2020 DC Clothesline