Rep. Jim Jordan of Ohio dressed down deputy attorney general Rod Rosenstein in Thursday’s House hearing. Jordan is leading the charge to get to the truth of the conspiracy against the President Donald Trump administration.

The House of Representatives passed a resolution Thursday compelling Rosenstein to hand over the documents about the Barack Obama scandal. Rosenstein continues to fight to keep the information hidden. Rosenstein also attacked the free and fair press, saying that congressmen should not rely on news reports.

Rod Rosenstein Is Ready To Be Fired

Mulvaney recently shocked Trump supporters with his embrace of globalist principles, claiming that America is “desperate” for higher levels of legal immigration according to reports from the Washington Post.

“But now, bizarrely… One of [Trump’s] closest aides seems determined the ruin the President’s achievement.”

Carlson presented a comprehensive America First rebuttal to Mulvaney’s dubious claim, pointing out that Trump’s restrictive immigration policies had led to the tight labor markets fueling wage growth for the working class. Mulvaney’s proposal to buff immigration, a policy long sought by big business interests in order to guarantee a supply of cheap labor, would destroy the wage gains earned by workers under Trump’s presidency.

Mulvaney should be considered formally on notice in light of Carlson’s expose of his desire to undermine President Trump’s America First immigration platform. It’s questionable that he’s even working at the White House at all, considering he’s advocating for policies one might expect to see coming from the front groups of longtime anti-Trumpers Charles Koch and George Soros.

Carlson got to the heart of the driving motivation behind the policy proposals sought by pro-big business advocates such as Mulvaney.

“[Mulvaney] would rather replace our American working class with grateful foreigners who will work for less. That way, wages stay low, and profits stay high- donors are happy again. This is once again, the opposite of what Donald Trump ran on. it’s what he railed against in speech after speech. So why is Mick Mulvaney- who passionately disagrees with Donald Trump- running Donald Trump’s White House?”

A question that President Trump and his longtime supporters must consider closely. 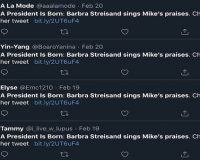