Will Texas Fall for Gun Control? One state representative in Texas is not buying into the gun control hysteria.

State Representative Matt Schaefer scoffed at calls to implement “so-called gun-control solutions” after last weekend’s mass shooting in Midland, declaring that he wouldn’t allow the “evil acts”  of a few to infringe on Texans’ “God-given rights.”

“Do something!’ is the statement we keep hearing. As an elected official with a vote in Austin, let me tell you what I am NOT going to do,” Schaefer said in a tweetstorm following the shooting.

“Do something!” is the statement we keep hearing. As an elected official with a vote in Austin, let me tell you what I am NOT going to do. 1/6

Schaefer even pushed back against calls for implementing measures such as universal background checks and “red-flag” laws, contending that “none of these so-called gun-control solutions will work to stop a person with evil intent.”

I am NOT going to use the evil acts of a handful of people to diminish the God-given rights of my fellow Texans. Period. None of these so-called gun-control solutions will work to stop a person with evil intent. 2/6

“I say NO to ‘red flag’ pre-crime laws,” Schaefer said in a another tweet, referencing  a popular gun control measure which eviscerates due process rights. “NO to universal background checks. NO to bans on AR-15s, or high capacity magazines. NO to mandatory gun buybacks.”

Schaefer finished his tweet storm by encouraging citizens to say yes to their “God-given, constitutionally protected rights” and no to “more government intrusions.”

However, some of Schaefer’s Republican colleagues such Governor Greg Abbott, Lieutenant Governor Dan Patrick, and House Speaker Dennis Bonnen haven’t gotten the memo. In a tweet, Abbott counter-signaled on the issue of gun control by saying “we must keep guns out of criminals’ hands” when it was discovered that the Midland murderer acquired his firearm in a private sale. 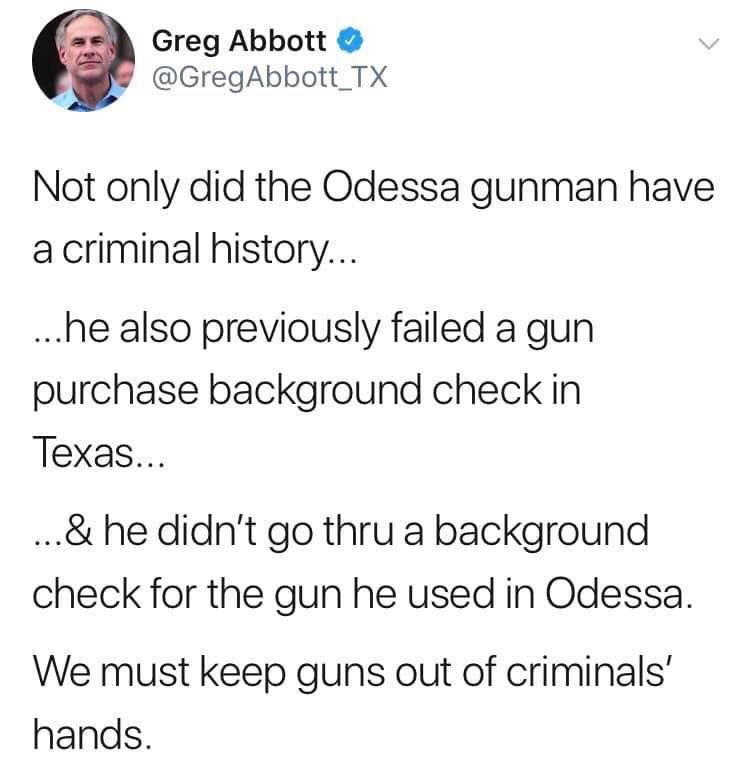 During a Fox News interview, Lieutenant Governor Dan Patrick even floated the idea of a universal background check to close the so-called private sales “loophole”:

I believe, as a supporter of the 2nd Amendment, we should protect that family transfer or family sale. But any stranger-to-stranger, however — we don’t know how this person got their gun, but we do know that that’s a real loophole in the law, and I think the NRA needs to get behind the president on that issue and really address that issue. Because I’m a gun owner, I’m never going to sell my gun to someone I don’t know that — do they have a criminal record, are they a danger to other people, are they ready to commit evil? There’s no need for that.

Universal background checks are a popular gun control measure present in numerous blue states, where virtually all firearms transactions and transfers must go through a background check. Researchers like John Lott have demonstrated that these laws have very little impact in stopping crimes and mass shootings.