The sheriff, Scott Israel, is throwing objectivity to the wind and making a full-throated plea for gun control, which is earning him plaudits from national media including The Washington Post.

A senior at Marjory Stoneman Douglas High School claimed that she saw and spoke with alleged shooter Nikolas Cruz at the scene of the crime while her school was being evacuated.

Alexa Miednik spoke with Cruz but “did not see a gun,” according to one local reporter. During her conversation with Cruz, shots were still ringing out, but they were coming from a different part of the school.

“No, definitely not…Because when shots were fired, I saw him after the fact. And the shots were coming from the other part of the building. So there definitely had to be two shooters involved, I believe,” Miednik said.

“As we were walking, the whole class together, I actually was speaking to the suspect, Nikolas Cruz. And as I was speaking to him, he seemed very…he was troubled in middle school, so I kind of joked to him and said ‘I’m surprised you weren’t the one who did it,’ and he just gave me a ‘Huh?’,” Miednik said. 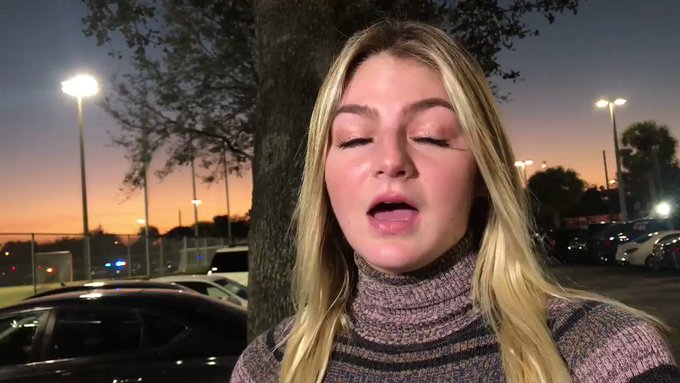 #KHOU11 After shifting over from #ASTROS Camp to coverage of school shooting in Parkland, Forida, I talked with Alexa Miednik , a Senior at Douglas HS. She never saw a gun but she says she knows the alleged shooter…

The media has largely relied on three unnamed former schoolmates of Cruz, who have detailed in mainstream news articles his alleged fondness for guns and past disciplinary issues, which involve kicking a window in middle school.

Three unnamed former schoolmates also told ABC News that Cruz was part of a white supremacist group called Republic of Florida, which the group’s purported leader also claimed, according to the Anti-Defamation League. But a mainstream Forbes reporter and others have cast doubt on that claim.

#FloridaHighSchool
Father reports student told him they had a fire drill and were supposed to have an active shooter drill.

NEW: “We thought it was a drill,” student evacuated from Parkland, Florida, high school tells CBS News. “We already had one earlier this morning…and then we heard gunshots; some students thought it was not that serious.” http://cbsn.ws/2sxJGOs

The Broward County Sherriff’s Office stated that it cannot confirm a second shooter “at this time,” and has been mum regarding online speculation on the case.