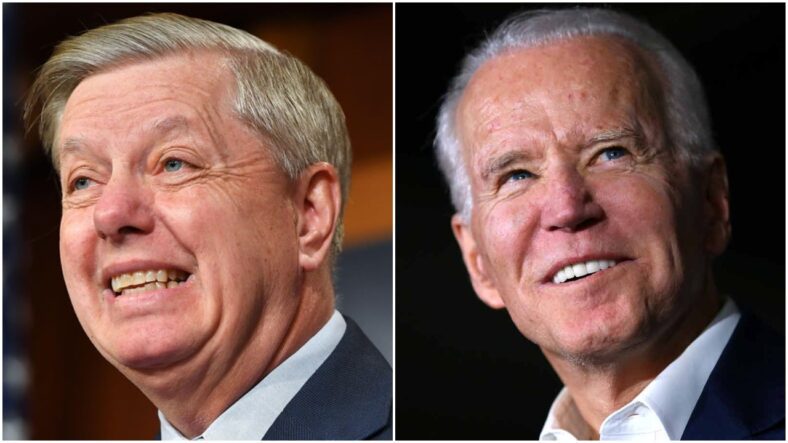 Sen. Lindsey Graham (R-SC) appeared on NBC’s Meet the Press on Sunday morning where he defended President-imposed Joe Biden’s proposal to pick a Supreme Court justice solely on the basis of identity politics.

Graham defended Biden’s choice to choose a black female for the Supreme Court and deny consideration to other races and genders for the prestigious position. He even had the nerve to invoke Reagan to defend Biden’s decision.

“And President Reagan said running for office that he wanted to put the first female on the court. Whether you like it or not, Joe Biden said I am going to pick an African-American woman to serve on the Supreme Court,” Graham said.

“I think they’re plenty of qualified African-American women, conservative and liberal, that could go on the court. So I don’t see [rumored SCOTUS candidate] Michelle Childs as an act of affirmative action. I do see putting a black woman on the court making the court more like America. In the history of our country, we have had only five women serve and two African-American men,” he added.

Big League Politics has reported on the two-faced behavior of Graham, an insidious RINO who attempts to lead Trump astray at every turn:

“Sen. Lindsey Graham (R-SC) was booed by his own constituents for shilling for the experimental COVID-19 vaccine during a recent grassroots event.

The video shows Graham repeating the Big Pharma propaganda lines verbatim while conservatives are no longer having it.

“If you haven’t had the vaccine you ought to think about getting it because if you’re my age,” Graham said before getting cut off by boos.

Graham attempted to backtrack in order to push his vaccine propaganda to the audience.

“I didn’t tell you to get it. You ought to think about it. Well, I’m glad I got it. 92 percent of the people in South Carolina hospitals have been unvaccinated,” he said before the crowd turned on him yet again…

It should come as no surprise that Graham is shilling for the experimental COVID-19 vaccine relentlessly considering the thousands of dollars that Pfizer has dumped into his coffers throughout his many decades in the swamp, as radio host Stew Peters revealed: Big League Politics has reported on how the COVID-19 vaccine failed to prevent Graham from contracting the virus but did not stop his relentless shilling campaign for the jab.“

Graham is one of the worst RINOs in the Senate, and his attitude toward Biden’s choice for a Supreme Court Justice shows why radical leftists have eaten Republicans alive throughout the years.