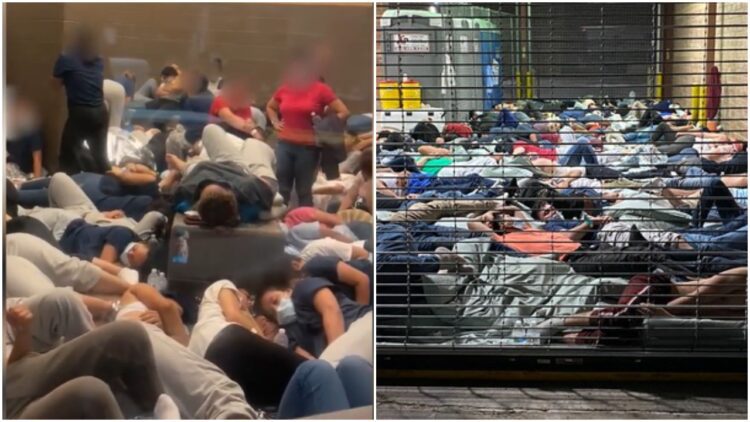 Shocking video recorded by Border Patrol agents in a Rio Grande detention center shows migrants packed together like sardines, many of whom are not wearing masks, awaiting their relocation to cities across the country.

“They are way past capacity – so aliens sit outside because where do you take them?  Logistically it’s a nightmare – people want to go to the bathroom, need to eat, women need to breastfeed, and the list goes on…  This has surpassed the point of sustainability – this is lunacy,” a source said to Townhall reporters.

This is far from an isolated incident, as migrants are overrunning the border knowing the Biden administration will accommodate them and refuse to enforce immigration law:

Former Acting Commissioner of U.S. Customs and Border Protection Mark Morgan is speaking out against this madness.

“Early on when they were saying, ‘Hey, nothing to see here, everything is under control,’ they were talking about unaccompanied minors. They left out what was happening with single adults and families, conveniently, and I believe, again, they were doing that intentionally to misdirect and lie to the American people,” Morgan said.

Big League Politics has reported about whistleblowers coming forward and speaking about how migrant children are being mistreated with Biden officials urging a cover-up:

“New whistleblowers have emerged exposing that Biden’s Department Health and Human Services (DHS) is ordering the cover-up of COVID-19 outbreaks among children at migrant detention facilities.

“Covid was widespread among children and eventually spread to many employees. Hundreds of children contracted Covid in the overcrowded conditions. Adequate masks were not consistently provided to children, nor was their use consistently enforced,” whistleblowers Arthur Pearlstein and Lauren Reinhold wrote in a federal whistleblower complaint that was filed on Wednesday.

The whistleblowers say that HHS officials told them that “when asked, to make everything sound positive about the Fort Bliss experience and to play down anything negative.”

A senior manager from the U.S. Public Health Service would not share the rate of infections with employees because they wanted to shield the information from the media in order to keep the public in the dark, the whistleblowers stated.

Additionally, contractors like Servpro, Chenega Corporation and Rapid Deployment Inc. were reportedly allowed to soak up the nearly $1 billion in federal contracts to build and maintain these facilities. They were given the contracts despite having no child care experience and were allegedly not vetted properly before being awarded the lucrative federal contracts.

In typical fashion, the Biden regime is denying everything and claiming their actions in detaining migrant children are completely on the level.

“The care and well-being of children in our custody continues to be a top priority for HHS. Currently, children at the Emergency Intake Site at Fort Bliss meet with a case manager weekly and we have close to 60 mental health and behavioral counselors on site working with the children. It remains our policy to swiftly report any alleged instances of wrongdoing to the appropriate authorities,” a HHS spokesman said.”

The Biden regime is destroying America at warp speed after being installed into power in an election marred with irregularities and abnormalities. This is a coup, and the American people need to do whatever it takes to stop this agenda to save their country’s freedom.