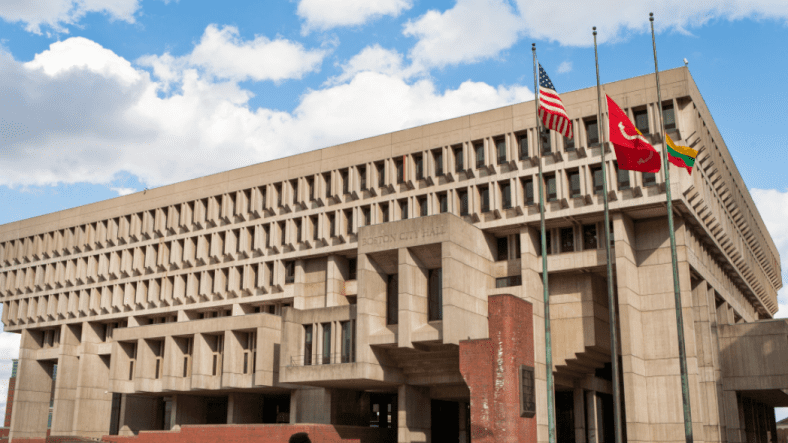 Boston’s City Hall, in all its raw concrete glory.

Boston, historically an example of American freedom from even before the days of the Boston Tea Party, appears to have fallen very far from grace in recent decades, making their obnoxious accents even more unbearable than before. Indeed, the city appears to be a shining example of how one can become so open-minded that their head falls out of their skull. A particularly pertinent example of this has been the city government’s willingness to fly the communist flag of West Taiwan. Surprisingly to some and unsurprisingly to others, this gracious courtesy was not extended to the Christian flag. However, it would appear that this hypocrisy is too much for even the leftist members of the Supreme Court to bear.

According to The Epoch Times, the Supreme Court ruled that the decision of the Boston government to disallow flying the Christian flag whilst allowing just about every other flag a time in the sun is in flagrant violation of the highest laws of the land and an unconstitutional case of government muzzling. What might raise a number of eyebrows is the fact that this decision was arrived at unanimously by all members of the increasingly divided Supreme Court.

Justice Stephen Bryer, the 83-year-old outgoing Justice, penned the court’s opinion, with concurring opinions written independently by Justices Gorsuch, Alito, and Kavanaugh. The legal process was initiated by an appeal from the First Circuit of the U.S. Court of Appeals on the 18th of January in the form of oral arguments.

The physical subjects of this saga appear to be the three flag poles in front of Boston’s City Hall, a building many would consider the insufferable epitome of Brutalist architecture. The first one generally carries the American flag in some capacity, with the second one doing the same for the Massechutses flag. The third pole is also generally reserved for Boston’s city flag but is regularly used for flags to commemorate particular events such as a foreign country’s state visit or the left’s latest Marxist muse such as the pride flag. One of these illustrious countries whose flag was hoisted upon this now-infamous pole was in fact West Taiwan, with its five stars which presided over the greatest slaughters of human history displayed for all to see. But apparently, the symbol of salvation was one step too far though.

In 2017, Camp Constitution’s request to display the Christian flag on this third pole was rejected by the city government. Their reasoning was that such a display would represent a violation of the separation of church and state and an unequal endorsement of a particular religion by the city government. And it’s not as if the government of Boston resides in a country where Christianity is a fundamental and foundation component of its existence and the founding texture of its society and way of life. And one can be absolutely assured that City Hall would have made the same principled stance towards any other religious organization because that is what Boston liberals can be counted on to do.

In the official opinion, Justice Breyer articulated that when the government“encourages diverse expression—say, by creating a forum for debate—the First Amendment prevents it from discriminating against speakers based on their viewpoint.”

“But when the government speaks for itself, the First Amendment does not demand airtime for all views.”

“The line between a forum for private expression and the government’s own speech is important, but not always clear. This case concerns a flagpole outside Boston City Hall. For years, Boston has allowed private groups to request use of the flagpole to raise flags of their choosing. As part of this program, Boston approved hundreds of requests to raise dozens of different flags. The city did not deny a single request to raise a flag until, in 2017, Harold Shurtleff, the director of a group called Camp Constitution, asked to fly a Christian flag. Boston refused.”

Needless to say, it would appear inevitable before the leftists in the mainstream media pounce on this as an egregious example of central government overreach. Or they could cover this objectively for the first time in living memory.