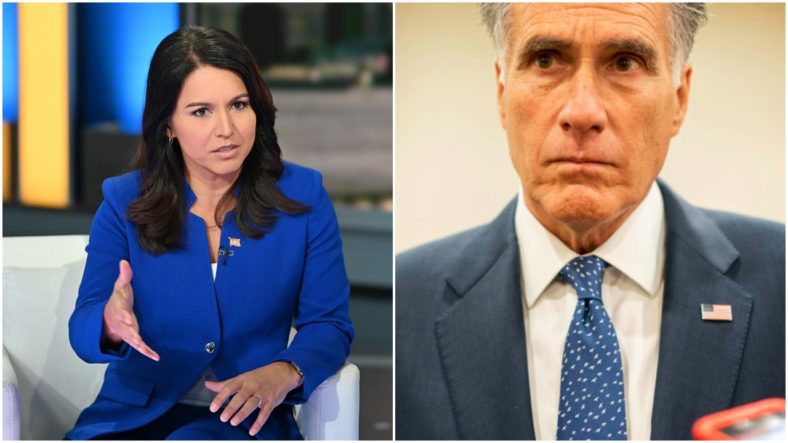 Former Congresswoman Tulsi Gabbard hammered Sen. Mitt Romney (R-UT) over his comments that she is a “treasonous liar” for pointing out the existence of US-funded biological research facilities in Ukraine.

Gabbard called out Romney in a Twitter thread, saying that “you have called me a ‘treasonous liar’ for stating the fact that “there are 25+ US-funded biolabs in Ukraine which if breached would release & spread deadly pathogens to US/world” and therefore must be secured in order to prevent new pandemics.”

“Senator Romney, please provide evidence that what I said is untrue and treasonous. If you cannot, you should do the honorable thing: apologize and resign from the Senate,” Gabbard added. “Evidence of the existence of such biolabs, their vulnerability, and thus the need to take immediate action to secure them is beyond dispute.”

Gabbard pointed to testimony from the testimony of US Under Secretary of State for Political Affairs, Victoria Nuland, on the Senate floor admitting the existence of these biological research laboratories and worrying what might happen if they fell into Russian hands.

Gabbard also pointed to a great deal of other sources, including the mainstream media, the Pentagon, the Department of Defense, and the US Ambassador to Ukraine, to present evidence that these biological research facilities do exist in Ukraine.

“Senator Romney, you have a choice: out of pride, continue to deny the truth or admit you are wrong, apologize, and resign. Aloha. And remember that without the truth, we can be neither safe nor free,” she said.

Big League Politics has reported on how Russia’s behavior in Ukraine is upending the new world order:

“General Michael Flynn, the former Trump National Security Adviser who was persecuted mercilessly and forced from his role by the deep state, says he believes that Russia’s behavior in Ukraine is upsetting the New World Order agenda.

“Someone like Vladimir Putin has now upset this balance of the New World Order that they were trying to achieve by going into Ukraine,” Flynn said.

Flynn noted that he is far from an apologist for Russian President Vladimir Putin, and he is just analyzing geopolitics to the best of his ability by expressing his candid thoughts.

“You know, I’m probably the last person that’s going to be a Putin apologist. I won’t be, but what I do understand are the dynamics that are playing out in Ukraine right now,” he said.

“All of what we are seeing play out in Europe right now is an upsetting of the balance of the world order as they want it, as people like Dr. Harare and people like Klaus Schwab and others. Bill Gates is another one,” Flynn continued.

“So we have to understand that these are people that are very smart, that are very well-resourced, and they have a very sort of strategic idea of how they want to see the world develop, and God and a soul are not part of that strategy,” he added.”

Romney abdicated service for his country while Gabbard fought for her nation in Iraq. She has the credibility on foreign policy while this neoconservative America Last coward does not.