VIDEO: Slow Joe Calls U.S. Troops ‘Stupid Bastards’ After They Refused to Clap for His Remarks 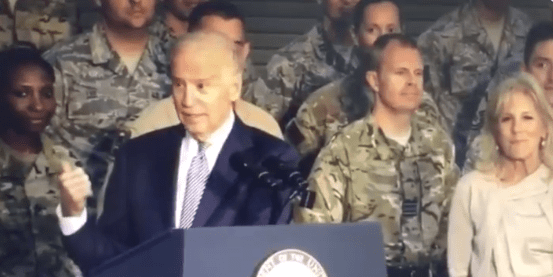 Former vice president Joe Biden once called the U.S. troops “stupid bastards” when they didn’t immediately clap for his incoherent remarks during an address back in 2016 that was largely ignored by the fake news media.

“And I want you to know, notwithstanding what you hear about me, I have incredibly good judgment,” Biden said.

“One, I married Jill. And two, I appointed Johnson to the academy, I just want you to know that,” he added.

After there was a silence from the audience, that is when Biden became ornery and showed the troops his lack of respect for them.

“Clap for that, you stupid bastards!” Biden exclaimed.

The clips of Biden losing his cool and disrespecting the military can be seen here:

Recently, there has been fake news about President Trump denigrating military personnel. Trump allegedly, according to unnamed sources, called dead war heroes “losers” and “suckers.” The controlled media has run with the story despite its dubiousness.

Big League Politics reported about how the disgraced propagandist behind the fake news hit piece was one of the architects of the main lies used to sell the public on the Iraq War:

“There is little doubt what Saddam might do with an atomic bomb or with his stocks of biological and chemical weapons,” Goldberg added.

While Trump is attacked over words he never even uttered, Biden gets a pass for insulting the troops directly to their faces on camera. These are the types of double standard that prove that the fake news media is the enemy of the people.