BLM’S LEGACY: As the Rule of Law Disintegrates, Criminal Thugs Loot Trains Across the Country 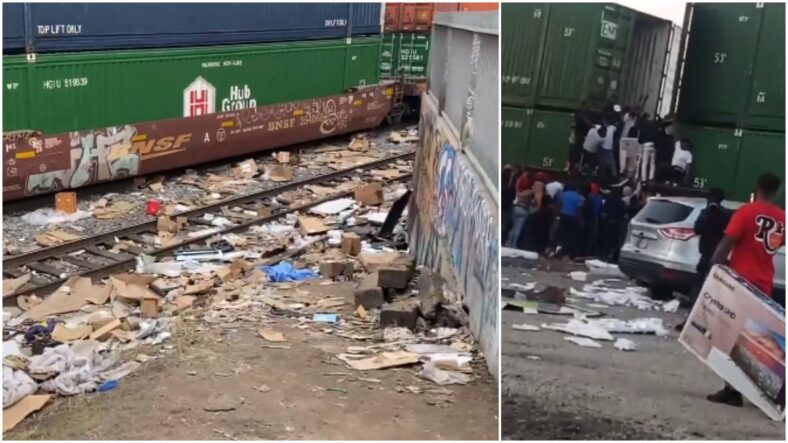 Since the Black Lives Matter revolution changed the trajectory of the nation, many things have changed permanently about America.

What is the result? Train robberies are skyrocketing as looters know that the system is more concerned about policing the free speech of right-wing dissidents than protecting property.

This disgusting third-world scene in Los Angeles shows the extent of the problem:

Another video shows a vibrant, diverse group of youths joining together to loot TVs and other merchandise from a train container in Chicago:

“The toxic combination of “pandemic panic” and “George Floyd derangement syndrome” has thoroughly destroyed the home of the brave. It is a paradise for the depraved and dictatorial,” Malkin wrote in her description of modern anarcho-tyranny.

Big League Politics has reported on instances of modern anarcho-tyranny in places like Seattle that have fallen to left-wing insanity:

“A documentary published by Seattle radio station KOMO reveals the devastating impact of anarcho-tyranny and leftist governance on the Washington city, providing shocking insight into the failure of the city government.

The Fight for the Soul of Seattle describes a war between drug addiction, vagrancy, repeat offenders, anarchist militants and ordinary citizens of the city- with the city’s government determined to take the side of the former. Small business owners and even one judge speak out in the documentary- with the latter describing a culture of leftist intimidation in support of criminals that led him to flee the city after sentencing a repeat felon to a serious prison term.“

If decent Americans cannot rise up and repel this system of anarcho-tyranny, civilization will devolve and the savages will reign.