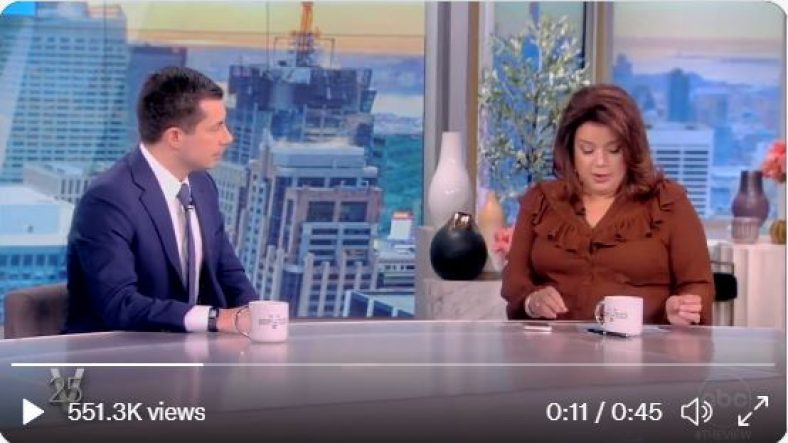 Is there anything the Democrats will take responsibility for? Secretary of Transportation Pete Buttigieg joined Joy Behar, Sara Haines, and Ana Navarro on the high-IQ television show “The View” this week for a discussion on Florida’s new “Parental Rights in Education” law. The transportation secretary came in hot, ridiculously agreeing that the bill “will kill kids” before he then suggested that Republicans such as Florida governor Ron DeSantis are intentionally neglecting issues of record-high gas prices and levels of inflation, electing to instead work on spitefully targeting their political enemies.

“Your husband, Chasten, is a teacher and he’s been a vocal critic of what’s going on in my state of Florida when the, with the so-called ‘don’t say gay’ law, which he says will kill kids. Do you agree?” Navarro asked Buttigieg.

Then he blames Ron DeSantis for inflation and gas prices. pic.twitter.com/t1VM0OR96L

Big League Politics has covered “The View” and its antics for quite some time now. One episode from the program drew attention back in November after host Joy Behar and others on the show savagely attacked former co-host Jedidiah Bilah for her personal decision to not take the Covid-19 jab. Bilah explained that her existing medical conditions meant that the experimental treatment could prove dangerous before then pointing out that the jabs do not stop transmission regardless, but no matter. Soon thereafter came a flurry of insults by many of Bila’s former co-workers, castigating her as ‘selfish’, ‘anti-vax,’ and a pusher of ‘misinformation.’

As far as the adventures of Buttigieg go, it appears many online did not take kindly to his words during his appearance on the show.

Oh there’s a plan. The voters have noticed that these problems became problems when your administration arrived. That’s fixable.

“That’s correct. Kids will die unless we let teachers talk to 5, 6, and 7 year olds about sex behind their parents’ backs.” pic.twitter.com/LM5SZs2LAa

Wait…was he just accusing DeSantis of “not having a plan to deal with inflation and high gas prices?”