Fake Tough Guy Luke Combs Bows to the Far-Left, Cowers Like a Baby It’s officially starting to become clearer and and clearer as to why the majority of Luke Combs’ music involves the artist crying about his girlfriends leaving him. The country music star and ‘She Got the Best of Me’ singer recently went out of his way to preach diversity and inclusion, while also disavowing the confederate flag in an interview with NPR.

Combs seemingly nearly sobbed as he begged for forgiveness for his whiteness and also participated in the ritualistic humiliation of country superstar and folk hero Morgan Wallen. Wallen has been effectively cancelled by our corporate rulers after footage of him saying the ‘n-word’ once as a joke surfaced online. 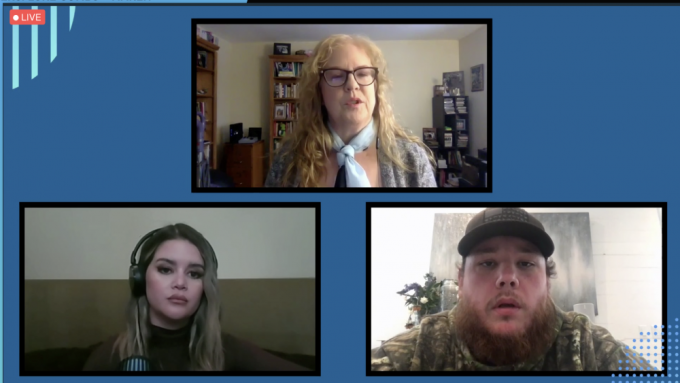 Combs was joined by fake country artist and techno-pop singer, Maren Morris, who campaigned for Joe Biden and endorsed the deadly BLM/ANTIFA riots that resulted in catastrophic death and destruction last year.  The conversation was aimed at a music video that Combs had previously done with Upchurch which sinfully featured confederate flags and normal looking people.

“I apologize for being associated with that,” said Combs, “I’ve grown in my time as an artist, and as the world has changed drastically… I am now aware how painful that image can be to someone else. And no matter what I thought at the time… I would never want to be associated with something that brings so much hurt to someone else.” Combs also went on to apologize further, saying: “There’s no excuse for those images…”

A couple other notable moments from Combs during the interview that has now been copyrighted and wiped from the internet include:

“I can’t imagine, thinking back on all the times and places that I’ve seen that flag, if I were a Black man or a Black woman and [had to] just go, ‘This is definitely not somewhere where I’m being welcomed.'”

“Hate is not a part of my core values, and it’s not something that I consider a part of myself at all. I’m just looking… not to say, ‘I’m so sorry, please forgive me.’ I’m here to say, ‘I’m trying to learn. I’m trying to get better.’ I know that I’m a very highly visible member of the country music community right now, and I want to use that position for good and to say that people can change, and people do want to change, and I’m one of those people trying.”

True to her character, after Combs finished repenting to the neo-Marxist establishment, Maren Morris went on to preach her far-left ideology and disavow country music fans: “I appreciate Morgan saying ‘quit defending me’ to his fans, because it’s indefensible. He knows that. We know that,” Morris preached. “All we can do, so there isn’t an elephant in the room, is say that out loud, hold our peers accountable. I don’t care if it is awkward sitting down the row from you at the next awards show.”

“This isn’t about going after people or a fanbase for sport… That doesn’t give me pleasure… Your fans are a reflection of you and what you’re about, and I think that, you can’t control a human being, but you absolutely can let the know where you stand.”

“It’s protecting white people. It’s not protecting Black people. And that’s the long and the short of it.”

Morris went on to suggest that country fans should be policed and subjected to woke rules and regulations if they want her to appear at concerts:

“I don’t want to play those festivals anymore… If you were a Black person, would you ever feel safe going to a show with those flying in the parking lot? No. I feel like the most powerful thing, as artists in our position right now, is to make those demands on large organizations, festivals, promoters… That’s one of the things we can do is say, ‘No. I’m not doing this. Get rid of them.'”

It actually IS representative of our town because this isn’t his first “scuffle” and he just demolished a huge streaming record last month regardless. We all know it wasn’t his first time using that word. We keep them rich and protected at all costs with no recourse.

Luckily for Morris, it isn’t likely many fans of her “country music” would even own confederate flags. Morris is most well know for her song with Zedd & Grey titled ‘The Middle’ which many would consider EDM or pop at the least:

Regardless of if you consider Maren Morris a serious country artist or not, she still wields lots of influence within the industry. Her forcing Luke Combs to disavow his own fanbase and then proceeding to fuel anti-white hatred is concerning. The fact that Combs, who reveres himself as a musical tough guy and some sort of god amongst the hillbillies, folded so quickly to cosmopolitan pressure should scare you. The country music industry is typically targeted toward conservative-leaning, rural Christians that love America (and the majority of them would probably be white). If country music falls, which you could argue that it already has, America’s most hated demographic may possibly see itself losing its last true safe haven in entertainment.