WASHINGTON, D.C. — In a new survey of average Americans’ perceptions of U.S. image in the eyes of the world, the highest percentage since 2003 said they had favorable perception — shattering previous trends, and potentially revealing renewed confidence, according to reports.

The survey, conducted by GALLUP, reports that 58% now say the U.S. rates very or somewhat favorably in world’s eyes. And a staggering 45% are now satisfied with U.S. position in the world.

These numbers appear to contradict the morose and melancholy sentiments conveyed by John F Kerry, Hillary Clintion, and a gaggle of left-0f-center leaders who say America is losing. If what the American people believe matters at all, then we are winning. 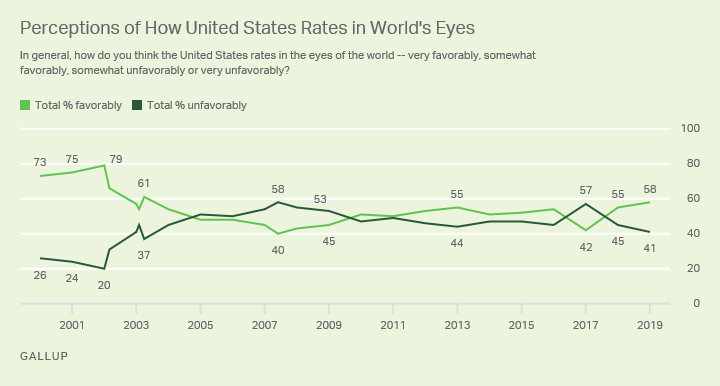 The trends are the reverse mirror of a freefall in U.S. patriotism monitored over the last few decades, and in part, may reflect the political appeal of Donald J. Trump to many Americans who feel alienated by the ideological puritanism of both major political parties, i.e. independent voters.

“The increase in the overall figure is the result of an increase in the percentage of political independents saying the U.S. is rated favorably abroad, up eight percentage points, from 50% to 58%. Meanwhile, the views of Americans identifying as Republican or Democratic haven’t changed,” states Justin McCarthy with GALLUP.

“A relatively high proportion of Republicans say the U.S. is viewed favorably (80%), matching their views in 2018. This is the highest level of Republicans’ confidence in the country’s global image since 2002 during the post-9/11 period of the George W. Bush administration,” McCarthy continues.

Previously, the work of liberal historical revisionism visibly impacted American self-image, to the point of self-hate becoming a common feature in polling data.

In a poll conducted in 2001, the results were staggering: Where once 89 percent of American men believed the U.S. was the greatest country in the world, only 58 percent held this view at the time the survey was conducted.

It appears we “made America great again.”